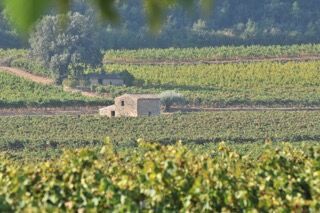 The Château Sainte Croix is located in the majestic setting of Provence on the ancient lands of the Thoronet Abbey. It dominates 50 hectares of vines.

Old fortified farm of the 12th century, Sainte Croix was inhabited by the Cistercian monks while they built the Thoronet Abbey three kilometers from here.

In 1924, while the Pélépol family lives from its farm business, the opportunity to buy 5 hectares of vines is offered to her. At first, they carried the grapes to the cooperative cellar of Carcès but in 1927, Fernand Pélépol decided to create his first winery in the village.

After a restoration of the old farm in ruins, the estate has grown over the years.

It is the fourth generation, composed of Florence and Stéphane Pélépol, who continues the family adventure.

From the top of its 35 hectares of vineyards, the Château includes various grape varieties, some of which, like the “Muscat”, have made the domain famous. The 15 hectares of remaining plots are located on the plateau of Carcès, caressed by the Mistral and the beautiful sun of Provence.